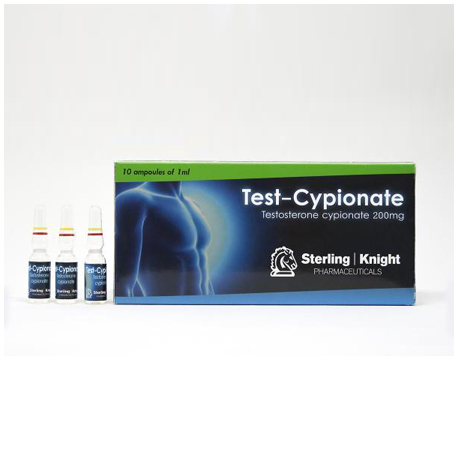 Test-Cypionate provides testosterone cypionate, a derivative of the primary endogenous androgen testosterone, for intramuscular administration.
Indications of Test-Cypionate
Males:
Testosterone cypionate is indicated for replacement therapy in conditions associated with a deficiency or absence of endogenous testosterone. Primary hypogonadism: Testicular failure due to cryptorchisdism, bilateral torsion, orchitis, vanishing testis syndrome, or orchidectonly.
Hypogonadotropic hypogonadism:
Idiopathic gonadotropin or luteinizing hormone-releasing hormone (LH RH) deficiency, or pituitary-hypothalamic injury from tumors, trauma, or radiation.
Delayed puberty:
Testosterone cypionate may be used to stimulate puberty in carefully selected males with c1early delayed puberty.
Females:
Metastatic mammary cancer:
Testosterone cypionate may be used secondarily in women with advancing inoperable metastatie mammary cancer who are one to five years postmenopausal. It has also been used in premenopausal women with breast cancer who have benefited from oophorectomy and are considered to have a hormone-responsive tumor.
Cllnical pharmacology of Test-Cypionate
Endogenous androgens are responsible for the normal growth and development of the male sex organs and for maintenance of secondary sex characteristics. These effects include growth and maturation of prostate, seminal vesicles, penis, and scrotum; development of male hair distribution, such as beard, pubic, chest, and auxillary hair; laryngeal enlargement; vocal chord thickening; alterations in body musculature; and fat distribution. Androgens are responsible for the growth spurt of adolescence and for the eventual termination of linear growth, which is brought about by fusion of the epiphyseal growth centers. In children, exogenous androgens accelerate linear growth rates but may cause a disproportionate advancement in bone maturation. Use over long periods may result in fusion of the epiphyseal growth centers and termination of growth process. Androgens have been reported to stimulate the production of red blood cells by enhancing the production of erythropoietic stimulating factor. During exogenous administration of androgens, endogenous testosterone release is inhibited through feedback inhibition of pituitary luteinizing hormone (LH).
Adverse reactions of Test-Cypionate
Endocrine and Urogenital, Female:
The most common side effects of androgen therapy are amenorrhea and other menstrual irregularities, inhibition of gonadotropin secretion, and virilization, including deepening of the voice and clitoral enlargement.
Male:
Gynecomastia, and excessive frequency and duration of penile erections. Oligospermia may occur at high dosages.
Skin and appendages:
Hirsutism, male pattern baldness, and acne.
Fluid and Electrolyte Disturbances:
Retention of sodium, chloride, water, potassium, calcium, and inorganic phosphates.
Gastrointestinal:
Nausea, cholestatic jaundice, alterations in liver function tests; rarely, hepatocellular neoplasms, peliosis hepatitis.
Hematologic:
Suppression of clotting factors II ,V, VII, and Xl; bleeding in patients on concomitant anticoagulant therapy.
Nervous System:
Increased or decreased libido, headache, anxiety, depression, and generalized paresthesia.
Metabolic:
Increased serum cholesterol.
Miscellaneous:
Rarely, anaphylactoid reactions; inflammation and pain at the injection site.
Drug interactions of Test-Cypionate
When administered concurrently, the following drugs may interact with androgens, such as Methandrostenolone, have been reported to decrease the anticoagulant requirement. Patients receiving oral anticoagulant therapy require close monitoring especially when androgens are started or stopped.
Contraindications of Test-Cypionate
Androgens are contraindicated in men with carcinomas of the breast or with known or suspected carcinomas of the prostate and in women who are or may become pregnant. When administered to pregnant women, androgens cause virilization of the external genitalia of the female fetus. This virilization includes clitoromegaly,abnormal vaginal development and fusion of genital folds to form a scrotal-like structure. This preparation is also contraindicated in patients with a history of hypersensitivity to any of its components.
Precautions of Test-Cypionate
Generally, women should be observed for signs of virilization. Because androgens may alter serum cholesterol concentration, caution should be used when administering these drugs to patients with a history of myocardial infarction or coronary disease.

Be the first to review “Buy Test-Cypionate online” Cancel reply